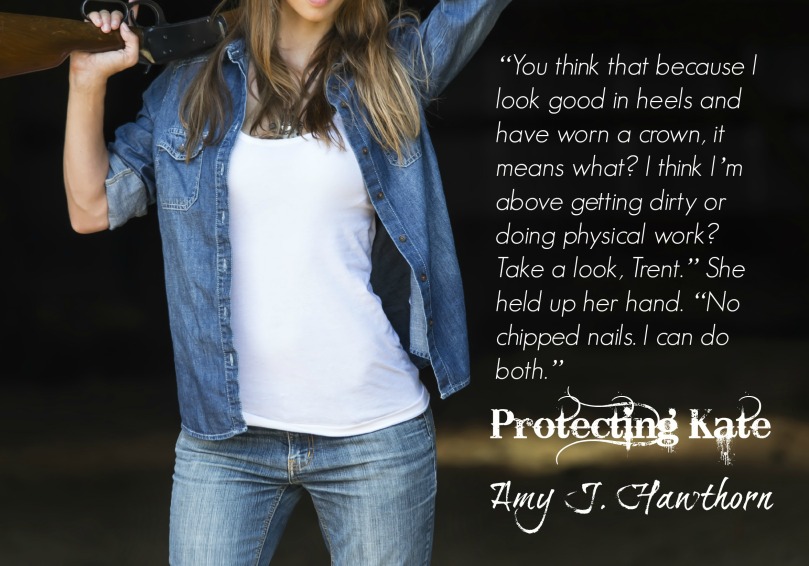 Welcome to bourbon country, the home of Dark Horse Inc., where the men work hard and women love fiercely. When danger comes knocking the members of Dark Horse Inc. use their skills honed from years of military service to protect those they love.

Book 1, Protecting Kate is free for a limited time. If you haven’t tried the series, now is the perfect time to meet those sexy as all get out country boys. Or if you have friend who hasn’t met Dark Horse? Feel free to send them my way. *cheesy-grin* Come on, help me FREE KATE! lol #akwaysandforeverthedork

Trent rounded the corner and stopped in the barn’s open doors.

Several things hit him at once.

A stunning brunette with hair halfway to her ass stood near Molly’s stall in a dress that displayed a body capable of making grown men cry. The boots, though a smart choice for the barn, were the last thing he’d ever expect to see on such a beautiful woman. Her classical good looks spelled trophy wife.

The slightly taller man in a blue button-up and city shoes had moved into her personal space and, though he seemed to know her well, the look on her face made it clear she was anything but happy to see him.

The second, slightly older man stood back a bit and watched with interest. He’d honed in on the brunette, fixated to a point that left Trent doubting a bomb blast could break his focus. Like the first man, he wore expensive shoes that shouted boardroom or…shit—politician.

Maybe he couldn’t toss the two pricks out with the trash, but he could put an end to their harassment.

“Preston, I divorced you, remember? Please leave me alone.” Her voice reminded him of honeyed bourbon. The warm, smooth tones whispered through him, making every cell take notice and reach for more.

“Kate, this will only take a minute of your time. We have a proposition for you…” The first man stepped even closer before he reached out to grasp her arm. She shrank back, pressed against the stall door. When Trent saw the golden tan of her arm turn white beneath the man’s brutal grip, he saw red.

She winced and tried to yank her arm free, but the man held fast. “I just need you to listen to me. Damn you, always so stubborn,” the man said through gritted teeth, as if ready to lose his temper.

Trent had heard and seen enough.

“Kate? There you are. I’m sorry I was late.” He slid in beside her and asshole number one immediately released her arm and stepped back. Figured. Trent couldn’t think of much worse than a coward who’d lay a hand on a woman, but didn’t have the balls to stand up to another man.

“Can I help you? I promised to introduce my…Kate… to pretty little Molly, here.” Trent’s smile filled with pure menace and let the men wonder about his relationship with the brunette. He turned his back to the men, dismissing them.

He glanced at her face to verify that she understood and would cooperate. Light brown eyes met his full of equal parts shock, wariness and relief. He could work with that. Once the tension in her heart-shaped face eased, her beauty jabbed him in the gut. Something deep and primal took root, an unbreakable leash holding him fast to his course.

Heaven help the man who tried to sway him.

“Where’d you find the boots? I didn’t even think about your shoes when I made my offer.” He clicked at Molly, and she cautiously came to stand in the middle of the stall. Another strike against the two idiots. They’d made one of his horses nervous. Molly might belong to the Mitchells, but she’d always be one of his animals.

“They’re Carol’s barn boots. I didn’t think she’d mind.” Her voice knocked him in his chest and slid down low beneath his belt.

“Smart girl. A man’s gotta love a lady who knows her way around a farm.” He clicked again and murmured to his girl. He loosely caged his arms around the two legged female and did his best to focus on the four legged one. “Come see Kate. You’ll like her. Ignore those two suits. They’re leaving.” Molly came forward and allowed Kate to rub a gentle caress over her nose.

He turned his head back to the men and didn’t bother to hide the fury from his expression. He hoped they understood they weren’t welcome and, if not for the females, he wouldn’t let them off with a verbal warning. “Gentlemen, we’ll see you later, correct?”

“Kate, we really need to speak with you about a business matter.”  The instant her ex-husband spoke, he felt tension roll off her.

“Not now and not today you don’t. She’s mine for the evening. We have a date with Molly.” He eased in as close as he could get without touching her expensive dress. He reached a hand out to Molly and breathed in the sweet, seductive scent of the woman before him.

Silence filled the barn for what felt like an eternity and then he heard the rustle of footsteps leaving. “They’re gone now. Do you want me to back off or wait a moment in case they come back?”

The heavy silence was broken only by the sound of Kate’s heavy breaths and the swish of Molly’s tail. “Wait a moment, please.” Not much more than a silken whisper, her words brushed over him. She’d been so quiet that he’d almost missed the waver of anxiety. They’d really rattled her.

He clenched his fists on top of the stall door. He breathed in her scent and pushed his anger down. “My pleasure.” And it was. So what if the polished princess before him was the polar opposite of what he wanted in a woman? She was no hardship to look at and that voice of hers went straight to his cock. He needed to keep her talking as he fought the urge to look down her cleavage.